The Past Meets The Future: From Wedding Gown To Infant’s Christening Gown

For many of us two of the most important days in our lives are the day we marry, and the day we have children of our own. If we are lucky, we will also see days when we are gifted grandchildren. Following my wedding day way back in 1984, I had packed away my gown thinking that one day I might have a daughter who would want to wear it at her own wedding. As luck would have it my dress, probably a size 2 or 4 by today’s sizing standards, would never fit my daughter. Although disappointed, I decided that when my daughter had children of her own I would repurpose my wedding gown into a christening gown for my grandchildren.

The idea for repurposing my wedding gown appealed to me for several reasons. First, although the marriage had not been a successful one, I had been blessed with beautiful children. Using the gown for the benefit of my grandchildren would give them a link to their roots. Second, the art of repurposing clothing is old, very old, and was very popular in the medieval time period, all the way up through the 19thcentury. Clothing and fabric were expensive, and important garments were passed down, reused, and even remade into different items. This process really appealed to the historian in me. So the idea took root, and I set out to repurpose my wedding gown for the benefit of my grandchildren.

The following steps will set out the process this project took. I had no experience to base this on, other than a pretty thorough knowledge of sewing in general, as well as a textile class in college long ago which taught me a tad about different fabrics, their content, and weaves.

Before proceeding I needed to determine how well the fabric of the gown had held up over the last 35 years. It had never been professionally preserved. On the contrary, for most of those 35 years the gown had been stored in a plastic bag – which is not recommended for fabric conservation. And, unfortunately, the gown had been loaned to my sister who wore it at her wedding, and she had not taken care of it at all. There was a wine stain on the front near the bottom, and even though the gown was meant to be “bustled” following the service, she had not done so, and the gown had been allowed to drag on the dirty ground throughout her reception. She then had packed the stained and soiled gown in the plastic bag, and returned it to me uncleaned, which I didn’t discover for several years. Over time the lace upon the gown had also yellowed. The fabric content of the lace differed from the gown, so the yellowing was limited to the lace alone. Luckily, for all its mistreatment, the gown was in remarkably good shape, if somewhat musty and dull looking. 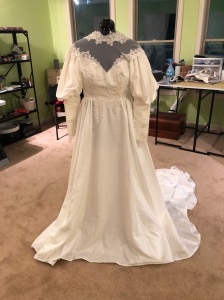 The original gown from 1984

The gown still contained its tags, which confirmed what I remembered. It was primarily man-made fabric, consisting of 75% polyester, 15% nylon, and 10% cotton. This meant that the job of cleaning the gown was made much easier. If the gown had been made of silk, for example, my process of cleaning the fabric would have been similar, but I would have had to treat it with more delicacy. I decided to soak the gown in a bath tub filled with cold water, in a solution of Oxyclean. After making sure the water and Oxyclean was thoroughly mixed, I ensured that the gown was completely covered. I left the gown sit in the cold-water bath for 24 hours.

At the end of its 24-hour soak, I drained the water then hung the gown to drip in the tub. I turned on the shower, set on cold, and let it wash away the Oxyclean residue, until it had been thoroughly rinsed. I could immediately tell that the gown was noticeably brighter, and a great deal of the yellowing of the lace was also gone. However, it still smelled musty to me. I decided to give the gown another soak cycle in the tub with more Oxyclean, and added a small amount of mild laundry detergent for a little extra cleaning power. I repeated the cycle for another 24 hours, then once again rinsed the gown in the shower. It was then left to hang dry for several days.

I was very pleasantly surprised to see that all of the stains and yellowing were gone. The only thing that I was not able to clean were the dirt stains around the hem of the train’s lining. As I wasn’t going to use the lining, I didn’t let that bother me.

Honestly, I wasn’t prepared for how tedious this step would be. Taking the gown apart wasn’t necessarily difficult, but it was slow going. I wanted to avoid damaging the fabric, and I wanted to remove the skirt panels from the bodice while keeping the bodice mainly intact. This meant I had to be very careful when working with the seam ripper around the zipper which extended into the lace, and around the top of the skirt where there were lace points extending down below the waist of the gown and were sewn onto the skirt. I started at the bottom hem of one side panel, lifted one stitch with the seam ripper, then gradually worked my way up. Once the outer skirt was removed from the bodice, the lining then had to be separated from the skirt.

Step 3:  Laying Out the Bonnet and Christening Robe Pattern

This is where things got tricky. I had naively thought that with such a big skirt and a fairly good size train that there would be plenty of fabric for both the baby’s outer robe, as well as the under gown. I could not have been more wrong. I had not taken into consideration that (1) the skirt was made of panels which had seams, (2) the gown’s waist was very tiny, and those panels were quite narrow at the top, gradually widening down the length of the gown, and (3) the skirt was floor length in the front, while the train was much longer. The differences in length affected the panels, as the side panels were cut on an angle going into the train. All this cut down on usable width of fabric.

I had to place pattern pieces very carefully and in such a way as to make the wisest use of the fabric. It actually took me several evenings of trying different layouts (and a lot of cussing), to come up with the most efficient layout. After all, it wasn’t like I could go out and purchase more matching fabric. I had to make sure that I made smart decisions. In the end I reluctantly came to the conclusion that there was not enough fabric to make both the baby’s robe and the under gown.  As the robe was completely lined, there would only be enough fabric for it and the bonnet. I decided to construct an under gown at a later date.

Step 4:  It All Comes Together – Constructing the Bonnet and Christening Robe

As close as I can determine the fabric weave of my old wedding gown is actually a taffeta. If you have ever worked with taffeta you know how dense a fabric it is. It requires a very sharp sewing machine needle, so if you ever decide to use taffeta make sure to start out with a fresh needle. Also make sure your scissors are good and sharp, and that your pins are sharp as well. Taffeta can snag pretty easily, so dull needles, pins, and scissors are your enemy. When pinning pattern pieces it’s best to keep your pins within the seam line, otherwise you might find you’ve left noticeable holes in your fabric. Taffeta also has a tendency to slide and slip, which I discovered the hard way when working on pleats. By the way, pleats are evil. Yes, they are. Tricksy pleats, we hatessss them.

Over all the bonnet and christening robe went together very well. I used Simplicity pattern 7488, which is no longer in print. I’ve had the pattern for a very long time, and fell in love with it years ago because it had a very elegant and regal appearance. It also reminded me of the christening gown worn by Queen Elizabeth I in 1533. I was nervous, however, because I really wanted this to be special. This bonnet and robe would be worn by my first grandchild, and hopefully passed down as a family heirloom and worn for many generations. I didn’t want someone to look at it in the future and think “Gee, Great-great-great Grandma wasn’t a very good seamstress, was she?” So I took my time, and proceeded much more slowly than I normally would. Also, working with arm holes the size of a newborn’s arms is rather difficult, there is just so little room to maneuver in. 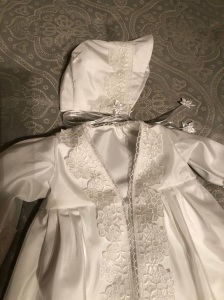 It was difficult to find lace that I really loved, but the lace my daughter and I ultimately settled on looked lovely. Sewing supplies are never inexpensive, and lace is no different. And I confess that the lace I really wanted to use was $22 a yard, but since I needed roughly 10 yards for the bonnet, robe, and under gown that price was more than a tad outside my budget. Thus my descendants will have to settle for lace that cost $8 a yard. I don’t think they’ll mind. If they do mind I won’t be around to care.

After the robe and bonnet were constructed, it was trimmed out in the lace and ribbon. Although the lace was applied via machine along the long straight edge, tacking down the lace across the width was done completely by hand. Here again, working with taffeta caused me to cuss a tad more. Alright, more than a tad. Very small stitches were made here and there so that the scalloped lace edges would lay flat against the gown. 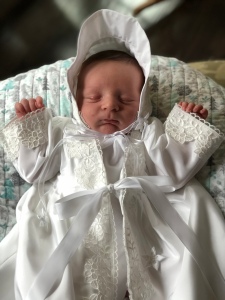 Adorable grandson, at his Christening

Ultimately the christening robe and bonnet turned out beautifully. People are amazed when they see it, especially when they hear that it was made from my wedding gown. The small amount of remaining fabric from the wedding gown has been packed away, but in the future may be used for something smaller, such as a ring bearer’s pillow or bride’s garter belt. I’ve packed away the bodice of my old dress on the off chance that it, too, might be repurposed one day.

Altogether it was a great learning experience, and the end result is a garment that hopefully will span many generations. And no matter how many times the taffeta slipped, or the pleats wanted to lay wonky, or I stuck myself with a needle, it was a labor of love and well worth the sewing pains. 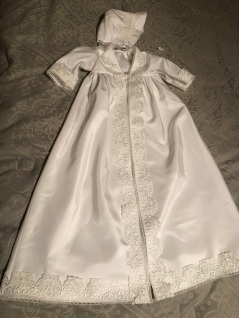 The completed christening robe and bonnet, a labor of love